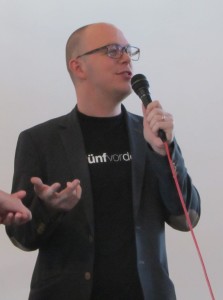 How would you describe Postyr?

We are an electronic vocal group, which means we don’t use any instruments when we perform on stage. We are five singers and one computer and we try to combine being very human and organic with this very structured computer world. I guess this makes it an innovation pitch.

What we try to excel at is being really good singers and not being only one soloist singer and a background choir, but that everyone steps forward to take the lead. We like to create an atmosphere and pictures in people’s heads when we do concerts – like the sound of the ocean or the sound of the sky. We try to take inspiration from all sides but in the end what we create just sounds like Postyr.

The computer plays an important role in your music. Was it your intention right from the start to use technology in a different sense than others?

I guess in the very beginning it wasn’t. The intention was just five people trying to do something new in the vocal scene. We were eager to show that a vocal group could do something similar to what e.g. Vocal Line does: come to stage and be themselves, sing songs that really mean something, that really tell a good story. It doesn’t have to be funny or romantic. The song could be about something like life and death – all the big themes in life – and that’s what we really wanted to do with Postyr.

Most of us came from Vocal Line and Vox11. So we were used to working with 8-10 voices. We wanted to create this atmospheric sound with only five people, so we quickly felt short of voices. Then I came along and I had all these loop machines etc. It was like: “who could sing the second soprano – we don’t have that, so let’s loop.” We just needed this from the start.

How did the use of technology evolve?

Working with the loop machines we soon found out that it was a really good method for doing the beat. We let the loop machines do the beat and then we were able to kind of relax in the music. I was doing the beatbox before – I don’t consider myself very good at it but I really love doing it. But it was fine for me to just record a scheme of two bars and then be able to sing instead. I love the dynamic things that you have when you have a real drummer, that you can actually do small fills and keep the beat together. It’s a little different when you have a loop machine, because it doesn’t think for itself.

The voice is not tuned. You can play a chord on a piano and each time it’s exactly the same chord. But every time you sing it, it sounds a little different. We felt that combining this with something that is always the same was a good mix. And we didn’t feel at all as if something was missing.

Later on I wanted to figure out how to make these loop things better. I’m a really curious soul, so I always need to figure out stuff. First I integrated some effects. Then I found out that I could do all the voices at different times. But I still had to push the pedal myself and this soon became too complicated. I had too many wires and it was too difficult for me to sing, beatbox and loop at the same time. So we moved everything into the computer. It’s now completely software-based.

Was this something you had to learn?

Yes, it was a process. I’m educated as a saxophone player. So I wasn’t even a soloist singer. I’ve been singing all my life but mostly as a choir singer. I’ve always sung in choirs – first as a soprano, now as a second bass. I was very eager to learn this.

When we started to work with the music production tool Ableton four years ago we were the first vocal group using it. There wasn’t much experience in doing live music in this way. Sound engineers use it, but they have a different approach. I wanted to be creative on stage and to do exactly the same what we do in the rehearsal room – without having to communicate with a sound engineer. This has been really important to us. We wanted to be able to control everything on stage ourselves and put the effects, reverb and loops at the right point in the song.

What’s your role within Postyr?

I’m the technology guy in Postyr. I’m the one who’s pushing the technology because I’m so interested in it. I don’t really have any hobbies. I don’t do any serious sports. My hobby is to read crazy blogs and hear podcasts about technology.

The difference between our group and others is that the exploration of a new technology comes from the inside. I’m part of the group, I’m a part of the singing and the composing and arranging and I also have this crazy interest in new technology. For other groups it’s more like: “yes, we can see this would really help our sound. Let’s find someone who can help us with this technology.” And then someone from the outside comes in and says: “yes, I can try to that while you sing.” For us it comes the other way round. I’m composing songs with the technology because I’m having the sounds in my head and the equipment right at hand.

What does the name POSTYR mean?

“Postyr” reminds a bit of the word “posture”. I think it originates from the Latin word “Positur”. But in Danish it means to make a fuss, make noise. We call it a positive disturbance, but I guess the Danish word rather relates to an annoying disturbance – e.g. there is a lot of “postyr” in the streets today because our local football club is playing. We try to do something different and make a little noise in the vocal world. We wanted our name to be just one word and something that’s not really used a lot in Danish. It’s like “Rajaton” – it just sounds Nordic and nice. But actually we’ve heard many crazy ways of pronouncing it…

How many concerts on average do you give per year?

I think in 2013 and 2014 we did about 150 concerts. I don’t know the exact number, but it was around 70-80 concerts a year – which is quite a lot and around half of them were outside of Denmark. We’re gonna have a little less concerts in 2015 because we’re concentrating on a new album.

Are you full-time musicians and can you live from your music?

We can survive, as we call it. We all do different stuff besides Postyr but it’s our main project. This is where put our career into but we are doing many other things as well. We’re not putting 100% into Postyr because we just do not earn enough money. Maybe we could push it to 150-180 concerts per year, but we would only be able to do that for one or two years and then we would just be tired and maybe have no family anymore…

We survive by giving space to each other, so we can do other things as well. Tine and Line are doing a lot of teaching and coaching. And I’m back at school. I’m back at the Royal Academy of Music. I finished as a saxophone player and now I’m studying Vocal Leadership. That’s really great!

Are the others all professionally trained singers or arrangers? And do all of you play instruments?

Yes, we are all from the Royal Academy of Music. Line is also an excellent church organ player and pianist but we all know how to play piano.

What do you consider the biggest highlights in the group’s history?

The first time that my song “My Future Self” was played in the radio (Radio 1 in Berlin). That was really, really great! And actually hearing from people saying that they heard the song on the radio while driving to work. That was huge! Sitting here in little Denmark and knowing that my song was out there that was a big thing.

I think the biggest thing was playing this incredible gig in in Taiwan in front of 25000 people in Taichung. It was really amazing! I had a substitute for the first week because my son was born three weeks before. So I wasn’t able to be on this 17-days-tour, but only for the last week. I arrived in Taiwan and the next day we drove to Taichung and that was the first concert for me in Taiwan with Postyr.

How did this come about?

We have good contacts to a unit called Vocal Asia. We met at the Aarhus Vocal Festival and they have been setting up tours in Taiwan for years with European groups. This big concert was part of a big Taiwanese Jazz Festival. We were just lucky to be in the country at the same time and the organizers read about us and thought we would fit to the audience.

Something that is very important to us is doing original music. It wasn’t that important in the start. We did a lot of covers. But finding out where we wanted to go and that we were actually able to do our original songs with Postyr it grew more and more important. And I guess that’s also important for playing at a Jazz festival to have something original to perform there.

Asia seems to be pretty hungry for vocal music. I know that many German groups performed there as well…

It’s true, they are very hungry over there. It’s dual-sided I guess. You’re really glad to be there and you’re excited that so many people come to see you and like the music. And at the same time you kind of feel like it’s because you’re from Europe and when you leave they will forget all about you. And they will just say “hi” to the next group that will be there. I’m not sure how much impact you get in the Asian crowd but it’s amazing to be there. They are so friendly and it’s great to feel like a rock star! We’re not big here in Denmark. Now most of the vocal community knows us but more people come to our concerts when we are in Hannover, Hamburg or Berlin for example. It’s a great community in Germany around vocal music.

I think in general in Europe there is a great community around vocal music. It’s great that everyone is treated equally.

Yes, and I think, this is also different than compared to playing an instrument. It has something to do with the voice. You will never judge a person for having a different voice, a different attitude or a different way of singing. Everyone can sing. Everyone has a voice. But it’s important that everyone feels welcome, because it’s such a personal thing. We all came from choirs. So it’s just natural to us.

Thanks a lot for the interview, Kristoffer!